The Depth of My Depravity 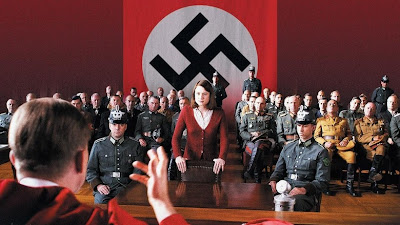 Last night I watched a German movie, Sophie Scholl: The Last Days. Made in 2005, it confronts the nation's Nazi past by telling the story of a 21-year-old woman who was executed, along with her brother and some others in the resistance group 'The White Rose,' for publishing leaflets critical of Hitler.

As the father of a twenty-one-year-old daughter, I found it simultaneously tragic, inspiring, and terrifying. It was tragic because a beautiful life, just like my daughter's, was snuffed out for no reason other than exposing such darkness as would not tolerate being brought into the light. It was inspiring because of her bravery and conviction and unadorned faith. It was terrifying because these evils were born in one of the most civilized societies in human history.

Evil is perhaps never so successful and insidious as when it is wrapped up so convincingly in a package which has something to commend it. This is why it can and does flourish in that pride we treat as a virtue and label "national pride." When God and volk (people, race, national identity) are fused, darkness is not far behind. Germany discovered that eighty odd years ago. Other nations are learning (or need to learn) the same lessons in modern times.

But national evil is only possible and successful because it is systemic "down the ranks." Evil flourishes in the saber-rattling of nations, in the venomous insults of campaigning presidential hopefuls, in the jealousies of academia, in the bullying on the playground, in the gossiping at church. . . simply because it is in the fabric of the human heart and we cultivate it like the addiction it is.

Evil thrives because the human heart is depraved. I mean yours. I mean mine. That is the most terrifying revelation of all.


Our Father, which art in heaven,
Hallowed be thy Name.
Thy Kingdom come.
Thy will be done in earth,
As it is in heaven.
Give us this day our daily bread.
And forgive us our trespasses,
As we forgive them that trespass against us.
And lead us not into temptation,
But deliver us from evil.
For thine is the kingdom,
The power, and the glory,
For ever and ever.
Amen