Three Out of Four Flights

We made it out of Madison OK, despite bad weather, unlike the other half of the U.S team, who were stranded in Chicago. They were still there when we left Detroit for Amsterdam, but upon landing we learned that they had to divert to Ireland due to low fuel. Without a miracle, they will miss their flight to Nairobi and then Lodwar tomorrow. Lord, we need a miracle.

I'm writing this just an hour out of Nairobi. Some got a few hours sleep. Others, including the two Blaikies, have had none in two days now. Starting to drag a tad. But tomorrow we're headed for Lodwar and the wonderful Turkana people. Can't wait.

Update at 1:30am. Long lines at passport control. Then one box lost, which was found, like the coin, sheep and son (one of the lessons the team will be doing with the Turkana kids), then some rigmarole over a tax exempt form the ministry doesn't have yet and an unexpected but reduced) tax bill of $100, and we're on our way to the hotel.

This is how it goes in Africa, so it's all good.

In other news, the rest of the team arrives in Nairobi tomorrow so will only be one day late.

All in all, a challenging but God-blessed day! Now for some God-blessed sleep. What time zone are we on? 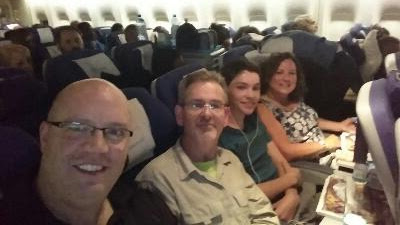 Posted by Graham Blaikie at 5:39 PM