Back in the Land of the Living

It's amazing what some R&R will do. Some sleep-ins, a good novel or two, or even three. Some good conversations with God. And family.

I am pleased to report that my general malaise is over. For now. Ah, life. What a gift from God. A forty-nine-year-old-gift in my case, as of yesterday, or the day before if you factor in my antipodean birthplace.

One of my staff members, in all sincerity, congratulated me on being half a century. I would have punched him out if he wasn't bigger than me and didn't have Prussian origins.

Another staff member gave me a box of my favorite kind of licorice, 'Good & Plenty,' which takes on an entirely different meaning as one approaches old age and consumes licorice in the kind of addictive quantities I do.

Another staff member gave me a helium balloon with a clip, which I clipped to my ear, and then my shirt pocket when that became too painful.

Ah, the simple pleasures of life.

I've been reflecting on them a fair bit the last week or so, and not just because I helped officiate at the funeral of a 92-year-old saint who left this life for the next. 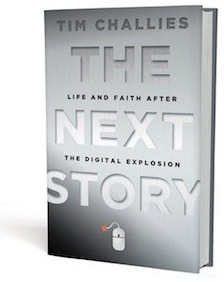 I've been reading a superb book by Tim Challies titled The Next Story: Life & Faith After the Digital Explosion. Ironically, I'm reading the whole book on my Android phone; it was a lot cheaper than getting it in print.

Challies, a Canadian who lives just close enough to the border to be considered an "honorary American" by those suspicious of anything not home-grown, is himself deeply enmeshed in the digital world. But in this book he steps outside it to examine that world (our world) through the lens of Scripture and theology.

His cautions and caveats have certainly grabbed my attention. Maybe I'll share some quotes along the way.