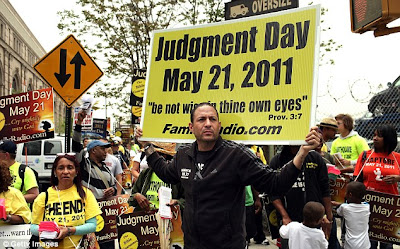 Got a phone call today from someone concerned the world is going to end tomorrow. Seriously.

But I'm bothered that Harold Camping, the great seer who got it wrong in 1994, is back at it again. But this time he's got it right, he says. And this time there's absolutely no doubt.

And we wonder why people think Christians are idiots. . .


As the deadline for the Apocalpyse passed in the Pacific islands, New Zealand and Australia, it seems the end of the world prediction is fizzling.
Twitter users around the world expressed their mock disappointment to the "non-rapture."
Daniel Boerman tweeted: "I'm from New Zealand, it is 6:06PM, the world has NOT ended. No earthquakes here, all waiting for the rapture can relax for now. #Rapture"
In Australia, Jon Gall tweeted: "#Rapture time here in Melbourne. A rather quiet sort of rapture if you ask me." Also writing, "Well we have had the #Rapture going for 50 minutes now. So far it hasn't interrupted my fish & chips and glass of stout."
Posted by Graham Blaikie at 3:01 PM