Kim Jong Il is dead. And some of us didn't even know he was ill. So goes one of the many forms of recent online mockery.

Today is the funeral of the "dear leader." It is a bitterly cold day in North Korea, a country some have called the world's last Stalinist state.


Mourners in parkas lined the streets of Pyongyang, waving, stamping and crying as the convoy bearing his coffin passed. Some struggled to get past police holding back the crowd. "How can the sky not cry?" a weeping soldier standing in the snow said to state TV. "The people ... are all crying tears of blood." The dramatic scenes of grief showed how effectively North Korea built a personality cult around Kim Jong Il despite chronic food shortages and decades of economic hardship.* 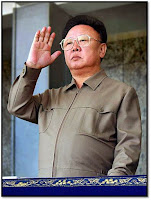 The cult of King-Herod-like personality shamelessly forced on millions of starving people is, perhaps, most clearly seen in the titles that have been bestowed on the the despot by the North Korean media over the last twenty years or so.

In addition to being the "dear leader" (the most common designation), he is the "wise leader," the "brilliant leader," "the Bright Sun of the 21st century." But wait, there's more: he is the "superior man" and "the perfect incarnation of the appearance that a leader should have." Let it be known to all the world that he is "the Great Man who descended from heaven." He is nothing less than "the Savior."

Kind of a shame that he is still stone cold after eleven days of death. One would think such a savior would be able to deal with rigor mortis after two or three days. Maybe that's a bit much to ask. Still, the list of superlatives above almost makes one feel just a little sorry for his son and successor, Kim Jong Un. Kind of a hard act to follow. And besides, all the best titles have been used up already.

I'm loving going through Matthew's Gospel repeatedly every 14 or so days on my android with Youversion.com.

A slice out of today's two chapters were right on the money (that would be the North Korean "Won").


Jesus called them together and said, "You know that the rulers of the Gentiles lord it over them, and their high officials exercise authority over them. Not so with you. Instead, whoever wants to become great among you must be your servant, and whoever wants to be first must be your slave--just as the Son of Man did not come to be served, but to serve, and to give his life a ransom for many."  - Matthew 20:25-28.

What a contrast: King Jon Il who lived for the people's adulation and presided over a police state which regularly took people's lives on a whim. And Jesus who was so much more than the Son of Man but willingly gave up the power and prestige of genuine Godhood in order to give his life away.

Of course, "Son of Man" is only one of Jesus' titles. As a self-designating title, it is characteristically humble during Jesus' sojourn on earth. Others, however, reveal that He is "God with us" (Isaiah 7:14; Matthew 2:23), that He is the Creator and Sustainer of all things in the universe (Colossians 1:16,17), that "in Christ all the fullness of the Deity lives in bodily form" (Colossians 2:9).

Jesus' Revelation to St John connects all the dots for us once the veil to the future is lifted. Jesus is free to reveal that He is, in fact, "the King of Kings and Lord of Lords" (Revelation 19:16). He is the "Root and Offspring of David, and the Bright Morning Star" (Revelation 22:16).

The little baby who was born in humility 2000 years ago is none other than the only Savior humanity could ever need or want. He gave his life as a ransom for many and rose on the third day to demonstrate his saving power. How astonishingly privileged am I to have been told that "good news of great joy that will be for all the people" (Luke 2:10).

May the people of North Korea fare better under their new leader. May the paranoia and closed borders loosen so that they will, one day soon, hear of the real Savior who is no longer dead but invites them into eternal relationship with Him.