Kenya: Land of My Fathers 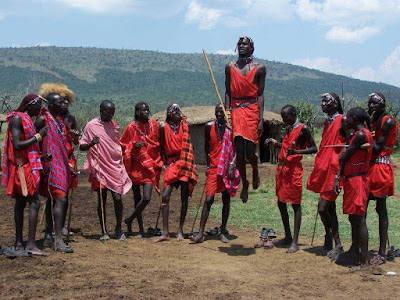 Kenya: land of my fathers. It feels kind of funny writing that. Kind of presidential. But it's true.

It's not true that I'm presidential (too short and born in the wrong country), but it is true that Kenya is the land of my fathers, unlike Steve Martin's politically incorrect claim in The Jerk: "I was born a poor black child."

In fact, Kenya is the land of my father AND mother (both were born there), and the place where both sets of grandparents invested all their working lives as missionaries. My parents, too, served there for a number of years before I was born.

My brother and sister were born in Zambia, but this is not their blog, so back to me.

Sadly, I was born in New Zealand. I say "sadly" not because I don't love NZ and not because I'm not a proud, card-carrying Kiwi. (I do and I am.)  I say it because I was always jealous of my sister growing up. People would ask her where she was from and she would proudly say, "Africa!" Then they would look at her to see if she was albino.

That one word had such a mystique to it. Being an African just sounded so much more exotic than being a kiwi. At least it did until Frodo and Gandalf came on the scene and helped moved kiwis beyond our deep inferiority complex.

I grew up in New Zealand with African carvings and curios festooning the house. Our first dog was named, "Jambo," Swahili for "hello." I heard stories of how my mother's glasses saved her eyesight when a spitting cobra attacked her in the hen house, and how my dad came running in with a gun and saved the day. I heard stories of when an incensed rhino was chasing and attacking a jeep. Of when Scar killed Mufasa. You get the idea. It was heady stuff--even better than a Wilbur Smith novel. I only had to run my hand over the bristly hairs on the treated elephant's foot in our living room to transport myself to the Serengeti, where my uncle had been game warden (the elephant was sick and he put it out of its misery).

But more than the allure of the savannah, or the thunderous roar of a lion, the main thing that impacted me was my parents' and grandparents' abiding affection for the African people whom they felt so privileged to have known and learned from and loved and served in the fellowship of the Gospel. What a heritage.

Now, at age 53, this Kiwi is leaving Wisconsin, of all places, to make his first pilgrimage to Kenya to learn from and love and serve alongside some wonderful Kenyans.

How blessed I am.

All my life, I never thought it would happen.

Maybe tomorrow I can tell you how it all, amazingly, came together.

Posted by Graham Blaikie at 7:42 PM