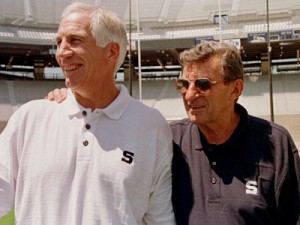 I have an innocent and unspoiled son, who has just turned thirteen.

And so I have been startled from my almost month-long blogging malaise by the sordid Sandusky scandal. Every blogger and his mother has been opining about the many evils of Jerry, and with good reason. I mean, the guy clearly needs chemical castration, if not castration by a rusty spoon (as some of my more out-spoken acqaintances would put it).

The case is cut and dried. Right? Or is it? Surely the whole world can't be wrong. Can it?

I'm not talking about Sandusky's innocence. The investigation by the Grand Jury leaves little to the imagination (though imagining such evils is the last thing most of us want to do).

I'm talking about the monster we've made him.

Only one problem. I'm not that much different. And nor are you.

That's the point we seem to have missed in all of our pontificating.

Now I'm not, for a minute, minimizing the horror of what those boys (and their families) have gone through, or will go through. It's not as if all sin is the same or that any other sin equates to the hell they've experienced.

When I think of the revulsion I feel towards Sandusky's vile behavior, I perhaps get a little glimpse into how God views my sin. I mean, as a fallen human being like Sandusky, I am a whole lot more like him than I am like God.

God, who is utterly holy, other, and infinite is as unlike me as it is possible to be. My similarities to Sandusky, however, are many more than I want to admit. I, too, am a sinner. The difference is simply type and degree.

Put Sandusky on this line, and he is on furthest-left stroke of the 'P' that starts the sentence.
Put the infinite, holy God on the line above, and he is as far from Sandusky as possible--the period on the far right. So, where am I on the continuum? You? We are with Sandusky, somewhere on that 'P.' Maybe we're a little to the right of him, but the distance that separates us and God remains gargantuan. We have no absolutely no basis for pride. From God's vantage point, we're a lot closer to Sandusky than we think.

That is what I believe has gotten lost in this whole tragedy. Our shock and horror and revulsion at Sandusky has allowed us to demonize him and canonize ourselves. Our disdain for him has so easily morphed into pride in ourselves. Rather than thinking, "there, but for the grace of God, go I," we think, "I would never do something like that." Rather than trembling at his particular display of human evil, and searching our souls deeply to see what we might be capable of, and repenting of our own wickedness, we ask, "How could any one possibly do that?"

Sure, let's go after Sandusky and his ilk to the nth degree of the law. Let's put him in the slammer and even throw away the key.

But may we never forget that the evil which consumed him also crouches at our door desiring to master us (Genesis 4:6-7). That the devil prowls around like a roaring lion seeking whom he may devour (1 Peter 5:8). And that the heart--yours and mine--is so desperately wicked, who can possibly understand it? (Jeremiah 17:9).

Posted by Graham Blaikie at 9:19 PM