I've given up trying to keep up or catch up on the days lost on my blog. It's been crazy. The thing I have done the most of is drive all over Auckland (a city of 1.5 million in a country of 4.5 mill) and drink lots of coffee and eat lots of food with lots of wonderful people.

Let me tell you from experience, you don't want to get stuck on the motorway in Auckland's atrocious traffic after two or three coffees or kiwi shakes. 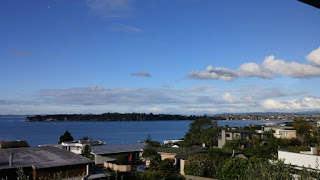 One of the coffees was with my mate, Rob, who just flew back in from the Philippines that morning. It was great to catch up with him and to look from Glendowie over to Bucklands Beach where I grew up in my early teen years, and to Musick Point which I tried rowing around a few times.

The first few days back in Auckland were very depressing since it rained almost all the time and I even started wishing the rain was snow, which says how miserable it, and I, was.

The only real bright spot was hanging out with Cheryl, my beloved big sis, two-thirds of whose face you can see in this "sister selfie." I think you'll agree this shot has captured my best side.

Posted by Graham Blaikie at 4:32 PM